After last Sunday’s tense, manic, and brutal racing over the cobbles of northern France, we return to a more conventional style of bike racing in the first Ardennes classic of the year.

The Amstel Gold Race is designed to cause as much stress and require as much strength as Paris-Roubaix, only where there were once cobbles there are now climbs, and lots of them. 35 climbs of varying distance and gradient will come between the riders and the finish line, the most important and iconic being the Cauberg. Appearing on the route four times this year, the last ascent of which comes 1.2km from the end, the Cauberg is where the decisive selections will be made, though perhaps not the final winner. Previous editions of the race have ended at the summit of the climb, but since the extra flat drag has been introduced, whoever has crested the rise first has not guaranteed themselves victory and may have to battle it out over a tense, sprint finish.

With all that in the race profile, this classic is a match made in heaven for the puncheurs and more powerful climbers of the pro peloton, and the start list reflects this. Dumoulin, Gallopin, Gilbert, et al are all leading their teams, with some squads resembling a selection for a Grand Tour. Quite a few battle-hardened cobbled classic riders feature as well (the likes of Vanmarcke, Benoot, Hayman, and Martin) but while we don’t expect these guys to feature in the closing stages, they will be called upon to use their current, imperious form to help their team leaders cover the distance of 250km with as few problems as possible. 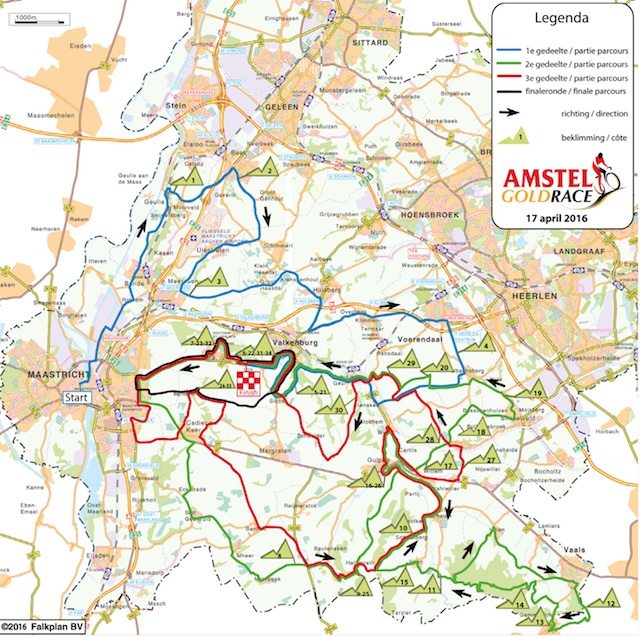 We’ll start with Team Sky. Featuring an astonishingly strong squad for the entire classics campaign so far, this Sunday they are led by defending champion Michal Kwiatkowski with some very reliable support in the form of Peter Kennaugh, Ben Swift, and Sergio Henao. Given their podium places of recent weeks and months, and Kwiatkowski’s current form, we can safely say Sky will be there in the closing kilometres of the race in some form or another, even if it’s one of Michal’s fantastic, but ultimately doomed, attacks he’s been enjoying putting in so far this year.

Fresh from their marvellous Paris Roubaix success, Orica-GreenEdge have brought a squad that clearly shows their intention to win at this year’s race. Led by both Michael Matthews and Simon Gerrans, they have strong support with Michael Albasini, Adam Yates, Daryl Impey and Luke Durbridge all to hand. Expect to see them taking control of the race in the final 20 or so kilometres and if all goes to plan, Matthews and Gerrans will be charging up the Cauberg together — whether they will work together for the win remains to be seen.

The aforementioned Tom Dumoulin and his Giant-Alpecin team will be hoping that this race can reignite their season, having been unfairly put on pause due to the training crash in January. Tommy himself has said that “this is the race of the year for me”, so we can expect big things from the big man himself.

With strong showings in the previous classics, Lotto-Soudal will be keen to finally get a win, and will be putting their faith in Tony Gallopin. Ever since his time in the yellow jersey in 2014, Gallopin has been a man to watch on days and courses like Sunday’s. Supported by a strong squad, he could be a dark horse to grab the win out of a select pack.

Finally, our other main favourite, and really, Belgian’s favourite, is Philippe Gilbert. The media has often joked that the Cauberg should be renamed after Gilbert, such is his dominance of, and adeptness on, the climb. Storming up the gradient to the rainbow jersey in 2012, winning the Amstel in 2014 and let’s not forget his 2011 triptych of victories across all three of the Ardennes Classics — Gilbert could probably win this race with his eyes shut, if his form allows him.

There really are so many other contenders that we would end up writing too many superlatives for too many riders, so instead here is a quick list of other riders we think can shake up the race, and maybe grab a victory:

Andy is going for Michael Matthews. Matthews will be keen on improving on his third place last year and can use his experience of getting bested on the final climb to his advantage this time round. His form and his team suggest that he’s got the best chance in years for a win.

Chris is hoping Michal Kwiatkowski can make it two years in a row. Sky are as strong as they’ve ever been and Kwiatkowski has been riding brilliantly these past few months.

James is going for the outside bet of Tony Gallopin. He’s hoping that Gallopin can improve on Roelandts impressive Milan Sanremo podium place and get the win for Lotto-Soudal.